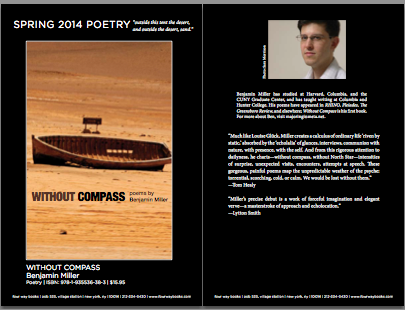 My first book of poems, Without Compass, is now available for purchase! Buy it through the Four Way Books website to show maximum support for a small press that has been very supportive of me. For the press release — including information on setting up reviews or readings — click here.

Advance Praise for Without Compass

Tom Healy, author of What the Right Hand Knows:

What is recorded in the “manual of dangers”? What can be learned from “the book of migration”? In his beautiful, bruised new book, Without Compass, Benjamin Miller presses questions on us about the risks of losing our bearings in the world of feeling. And his poems hurl us into new territory, answers that are somehow both brutal and comforting.

Much like Louise Glück, Miller creates a calculus of ordinary life “riven by static,” absorbed by the “echolalia” of glances, interviews, communion with nature, with presence, with the self. And from this rigorous attention to dailyness, he charts – without compass, without North Star – intensities of surprise, unexpected visits, encounters, attempts at speech. These gorgeous, painful poems map the unpredictable weather of the psyche: torrential, scorching, cold or calm. We would be lost without them.

Lytton Smith, author of While You Were Approaching the Spectacle But Before You Were Transformed by It:

Both as it saunters with the prophet’s stride and traipses with the acolyte’s hurry-up, Ben Miller’s precise debut is a work of forceful imagination and elegant verve – a masterstroke of approach and echolocation. These deft, Escher-like poems appear like magical tricks, yet there’s no gimmick to their studied resonance. As he reveals the significance of transitional spaces — borders, twilight, doubt – Miller shows us how we might think, if not more clearly about our lives, then more fully.

Kevin Prufer, author of In a Beautiful Country:

In these imagistic, shimmering, often enigmatic poems, Benjamin Miller meditates on the ways love and mourning both empty and purify us. Here, figures from the Bible express their fears whisperingly into our ears, and images — a folded bit of paper, blinking lights reflected on an airport window — are described with electric clarity. Seen through a car window, a fence becomes a zoetrope “that speed has all but made transparent, the empty space revealed beyond: a flipbook life” and the landscape outside a tent is “the desert, and outside the desert, sand.” Benjamin Miller’s work is nuanced, discomforting, and filled with a fascinating spiritual awe. This is a very fine and thoughtful book.

On Wednesday, September 17, 2014, I read at the Cornelia Street Cafe as part of the Perfect Sense reading series. You can listen to a recording here:

I will be participating in the Verdi Festival for the Arts on Tuesday, September 30, 2014, in a reading at the First Republic Bank on Broadway at 76th Street. The event runs from 7:00-8:00pm, and also includes poets Cynthia Cruz and Gregory Pardlo. Admission is free, but RSVPs are requested; see http://www.verdisquarefestival.com/news.shtml for more details.

Persistence as an Accident
The absence of news.
Pavement, and the heat of it
Against your cheek: light

In skin-tight circles.
How we danced, like rain
Or bees describing rain;

Returning, we are always
Here, bound, spun, struck,
Startled by the fleetness of

Desire and its counterfeits,
Bested and diffused.
I do not mean to hate you.

In a less mortal world,
Tree would be equal to
Wind, rocking gently

And rustle of leaves
Would never be translated
Crow in its descent.

But here beneath this moon –
Heroically young, pale, stone –
You lie, and won’t stop lying.
In the White Noise of the Evening
after Louise Glück

Forget me if I say I’ll leave you: the bashful
and never-spoken-to-again are always
riven by static. I cannot prove
what I can’t believe, while you discourse of
virtue as if it meant something: you haunt me like the open sea,
never a sane thing in a sane face.
Oh, you were ever lady finger, consonant, laying down
a pale second in the morning beside the nightstand,
and the day before, commanding in the tea box. You couldn’t see
us as less used to it, this chatter that inhibits risk
of becoming anything, the Price Club and the Money Tree,
the salt-free chip and thin gravy – were you right to deny
that I could resist? This is
how I cruel you to thought, with this refrain
in the white noise of the evening,
in the creaking ever rocking your chair, the latch
now lifting at the gate.

Need help with the Commons? Visit our
help page Send us a message
Skip to toolbar

Built with WordPress Protected by Akismet Powered by CUNY