In addition to my dissertation and teaching work, I have been continually involved in the following projects since their beginnings:

The Journal of Interactive Technology and Pedagogy

As part of the founding editorial team of The Journal of Interactive Technology and Pedagogy, I helped to craft the mission statement and review policies of this open-access online journal, which released its first issue in February 2012. Committed to the idea that the journal should promote learning experiences throughout its processes as well as its products, as coeditor (with Joseph Ugoretz) of Issue Two I introduced the “Behind the Seams” feature, which opens a reflective space for conversation about feedback and revisions that are often hidden for publication. We envision this feature working over time to create still further transparency, with navigable drafts and reviewers’ notes. I also encouraged reviewers to use the second person in addressing authors, to build investment in their ongoing improvement as writers. An active member of the editorial collective, I have served as reviewer, copy editor, and style editor, as well as participating in collective debate and decision-making. 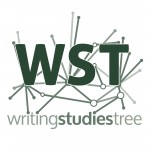 The Writing Studies Tree is an online, crowdsourced database of academic genealogies within writing studies; in other words, it is an interactive archive for recording and mapping scholarly relationships in Composition and Rhetoric and adjacent disciplines. In my role as lead developer, I have designed the data architecture, tested a number of different platforms before settling on Drupal, built out and maintained the Drupal backend, and coordinated with our programmer and my partners in directing the development of new features such as the D3 visualizations and filters. I was also the lead writer, with Amanda Licastro, on several grants, including two successful awards (in 2012 and 2013) from the Provost’s Digital Innovation initiative at the CUNY Graduate Center. Using that grant funding, I am currently seeking consultants and developers in user experience design, a subject on which I have been reading and sketching out ideas. Please contact me if you are interested in working on the Writing Studies Tree!

Need help with the Commons? Visit our
help page Send us a message
Skip to toolbar

Built with WordPress Protected by Akismet Powered by CUNY